It takes a lot of people to develop a COVID-19 vaccine. Volunteers may be one of the most important.

Recent pauses to two large-scale COVID-19 vaccine trials and a treatment study should reassure people — not frighten them — vaccine experts said, though it is a reminder of the messiness of science.

“This is an indication that the system is working as it was designed to work to protect human subjects in clinical trials,” Lawrence Gostin, a public health and legal expert at Georgetown and Johns Hopkins universities, said Tuesday. “It demonstrates that the ethical guard rails on vaccine trials are working.”

It’s not unusual for late-stage trials of drugs and vaccines to be stopped briefly to examine safety concerns, he and others said.

The discovery of an adverse event and a pause in the clinical trial is actually reassuring, said Dr. Bali Pulendran, a professor of immunology and vaccine design at Stanford University.

“Let’s say they got to the end of the clinical trial and there had not been one single report of any adverse event in the tens of thousands of people involved in the trial. That,” he said, “would worry me. That would be extraordinarily unusual.”

Eli Lilly announced Tuesday it was pausing a trial of an experimental drug similar to one President Donald Trump recently claimed cured him of COVID-19. On Monday, Johnson & Johnson halted a large-scale trial of a candidate COVID-19 vaccine. And, in September, British regulators put a hold on another trial of a candidate vaccine by AstraZeneca. They lifted the hold a week later, but it has continued in the American arm of the study. 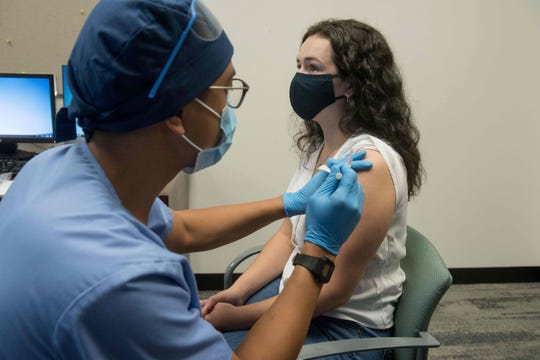 These occurrences should serve as a reminder that scientific research can be unpredictable, disappointing and time-consuming, specialists said.

“After four decades in vaccines, I expect the unexpected,” said Dr. Gregory Poland, director of the Mayo Vaccine Research Group and editor-in-chief of the journal Vaccine. “The nature of vaccine development is there are always surprises and the unexpected. Everybody’s looking for them, but time has to pass before you actually know.”

According to a new poll from Informa Pharma Intelligence, a business intelligence provider, and research firm YouGov, 35% of Americans don’t trust how quickly the COVID-19 vaccine clinical trials are moving and 23% don’t think pharmaceutical companies have consumers’ best interests in mind.

The public may have unrealistic expectations of avaccine that’s “100% effective and 150% safe,” said Alan Barrett, director of the Sealy Institute for Vaccine Sciences at The University of Texas Medical Branch at Galveston.

But he thinks the companies have shown an impressive attention to safety, including the trial pauses. “We can’t afford to have a mistake,” Barrett said. “The public has to have confidence that any vaccine given to them is going to be safe and effective.”

Only about 31% of all vaccine candidates make it all the way from Phase 1 clinical trials to market, according to a study published last year.

There are 49 COVID-19 candidate vaccines in clinical trials around the world, with nine in large, late-stage studies, Barrett said. Only three people out of the roughly 300,000 volunteers in all those trials have been known to have suffered serious side effects. “It’s not a big number,” he said.

The key challenge with vaccines, compared with treatments: Vaccines are given to people who are healthy. While a patient dying of cancer may willing to take a medication with lots of side effects, a healthy person shouldn’t be subjected to a risky vaccine, said Gostin, a law professor at Georgetown. “That’s why we need to be super careful that our vaccines are safe and effective before we deploy them.”

Late Monday, Johnson & Johnson announced it was pausing a trial of its COVID-19 candidate vaccine, JNJ-78436735, while it investigated an “unexplained illness” in a trial participant.  The company as well as an independent Data Safety Monitoring Board will review the participant’s case before deciding whether to resume the trial.

About half the 30,000 trial participants received a placebo and half the active vaccine. Only the Data Safety Monitoring Board members know which shot the volunteer received.  If it was a placebo, the trial is likely to be restarted quickly; if the problem could have been caused by the vaccine, an investigation will take longer.

A similar trial by the pharmaceutical company AstraZeneca was stopped in September after a second trial participant developed an unusual neurological condition.

I volunteered for a COVID-19 vaccine trial in New Jersey: Here’s what it’s been like since the shot.

In the United Kingdom, where the volunteer lived, regulators examined her case and decided the trial could resume there. But the U.S. Food and Drug Administration has kept the U.S. trial on hold as it investigates her case.

Little has been revealed about her problem, though it is believed to be something called transverse myelitis, a spinal inflammation that can cause temporary paralysis. Both she and the other person who suffered a serious side effect, a woman who had a flare-up of previously undiagnosed multiple sclerosis, have apparently recovered. 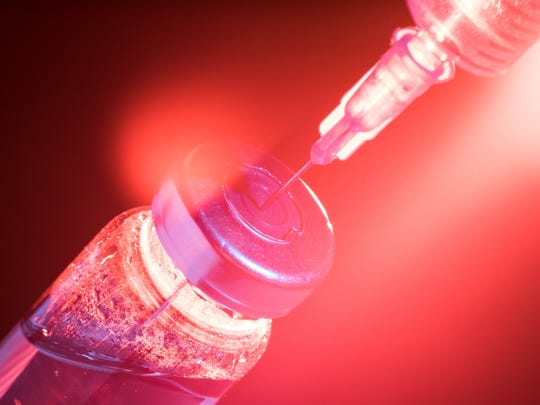 If it turns out that the adverse event in the Johnson & Johnson trial was also some type of nerve issue there is a theoretical, but by no means proven, reason it could be linked to the way the vaccine delivers its immunological payload.

“There are theoretical reasons it could be,” said Dr. Otto Yang, a professor of medicine and associate chief of infectious diseases at UCLA’s David Geffen School of Medicine.

Both the Johnson & Johnson and AstraZeneca candidate vaccines use a platform based on a harmless human virus called an adenovirus. The ones they use are uncommon in nature so most people have not developed immunity to them.

A very tiny number of people who are naturally sickened with adenovirus develop transverse myelitis, which is a neurological disorder of the spine that can cause paralysis.

Experts: Politics will have a hard time getting in the way of a safe, effective COVID-19 vaccine

“Nobody knows why it happens, but it appears to be some type of immune response, perhaps the immune system is reacting to the virus and that’s causing a cross-reaction,” said Yang.

He cautioned that the possibility of a link is extremely theoretical and there is no data to support it at this time but said it certainly warrants a pause while the companies investigate.

“Transverse myelitis does happen very rarely all by itself. So if it’s a 1 in 100,000 event and you see it in one person, then OK. If you see it in two people, then it starts to be suspicious.”

Barrett, of the University of Texas, said he doesn’t think virus delivery systems can explain the recent problems. “There’s no information to suggest they have problems,” he said.

Eli Lilly released a brief statement Tuesday explaining the pause in their trial of a monoclonal antibody, which mimics the natural immune response to the virus.

“Safety is of the utmost importance to Lilly,” according to the statement, released by company spokeswoman Molly McCully. “Lilly is supportive of the decision by the independent D.S.M.B. to cautiously ensure the safety of the patients participating in this study.”

Trump last week touted the benefits of the experimental monoclonal antibody he was given a day after his diagnosis with COVID-19. That drug is made by Regeneron, a Tarrytown, New York, company.

The Lilly antibody trial, led by the National Institutes of Health, was to have enrolled about 300 volunteers with mild to moderate COVID-19 who have been sick for fewer than 13 days. Half the participants would receive the antibody via infusion and half a saline infusion. Plans are to expand the trial to another 700 participants, including more severely ill patients if the antibody performs well.

The antibody, called LY-CoV555, was isolated from the blood of a recovered COVID-19 patient.

Gostin, who also directs the O’Neill Institute for National and Global Health Law at Georgetown, said he’s troubled by this second hold.

“The two medical interventions that are most likely to dig our way out of COVID are vaccines and monoclonal antibodies,” he said. “It shows us that science is miraculous, but it’s not foolproof and it doesn’t always win over Mother Nature.”

In the end, said Gostin, we just have to “be patient. Let science take its course.”