A labourer who lost his income during lockdown pulled out two of his own teeth with pliers and downed eight cans of Stella Artois to numb the pain because he couldn’t get a dental appointment due to the coronavirus crisis.

Chris Savage, 42, resorted to yanking two of his own teeth out in his bedroom because he couldn’t register with a dentist or book an emergency appointment, calling last Thursday’s procedure ‘the most horrible thing I’ve ever done’.

He said he had been in ‘agony’ for days, and revealed that just touching the tooth with his rusty pair of pliers set off waves of ‘agonising pain’.

The labourer, from Southsea in Portsmouth, Hampshire, admitted to getting ‘very drunk’ beforehand by downing eight cans of Stella Artois to mask the pain before he pulled out the first tooth. He then waited a day before pulling out the second tooth.

His case has now been raised with the NHS by a health watchdog who said Mr Savage has been ‘severely let down’ by services in the city.

He said: ‘I ended up having to get very drunk the first time. Nobody wants to take part of their own face away with a set of pliers and no real painkillers.

‘I put the pliers on my tooth and the second I did that it hurt. So I took them away, waited five minutes, built up again and then thought I’ve just got to do it. 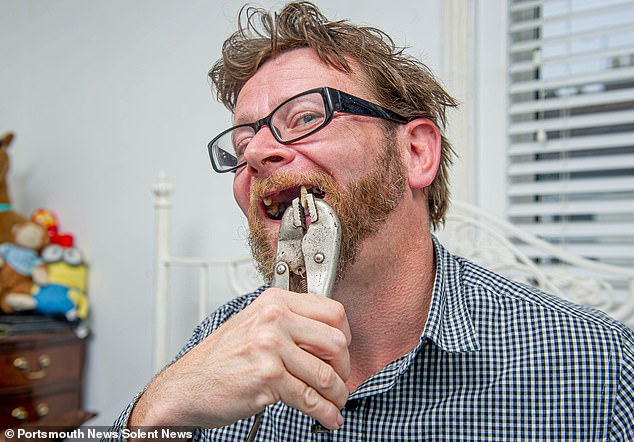 Chris Savage, 42, resorted to yanking two of his own teeth out in his bedroom because he couldn’t register with a dentist or book an emergency appointment 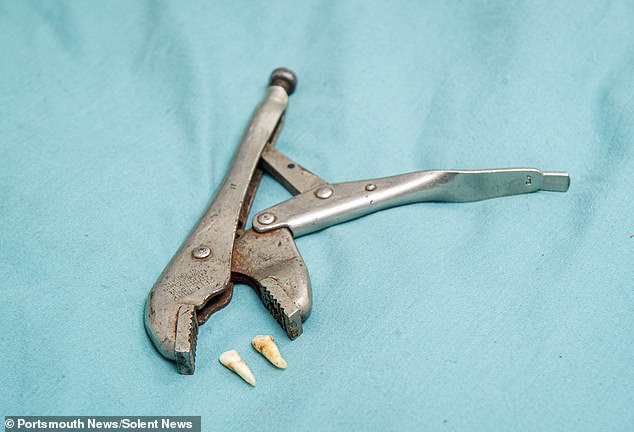 The labourer said he had been in ‘agony’ for days, and revealed that just touching the tooth with his rusty pair of pliers set off waves of ‘agonising pain’

‘It was a proper yank, a grip and pull — there’s no mucking about once you get to the point it’s started coming out.’

Mr Savage added that though there wasn’t much blood there was ‘enough to be scary’, and that it was ‘worth the risk of infection’.

The father-of-three didn’t register with an NHS dentist when he moved to Portsmouth from Alton three years ago. He lost his two front teeth in a bicycle crash last year, and when he began to experience pain recently he called around 20 dental practices, none of whom were taking on new patients.

He then phoned 111, who directed him to a practice that had volunteered to do triage appointments during the pandemic to help the NHS, but was referred back to 111 when he contacted them.

‘It was like a massive game of pass the parcel’, he said.

Mr Savage signed up to receive Universal Credit during lockdown, leaving him with £50 a week for food and bills, meaning he was reluctant to spend the £100 per tooth it would have cost him to have them removed privately.

‘Hygiene wasn’t going through my head, it was just ‘get this out’ – but the relief was worth it. The squelch noise as you pull it out is like nothing I’ve ever experienced and I thought ‘I’ve made a big mistake here’.

‘Then 10 minutes later there was a massive relief, but I couldn’t do that second one.’

A spokesman for NHS England and NHS Improvement South East said: ‘If a patient has been clinically assessed as needing urgent treatment which cannot be carried out by a local dental practice they can be referred to one of the urgent dental care hubs which remain in place.’

Extra practices should open in Portsmouth in early 2021 after new contracts are ‘finalised shortly’, they added. 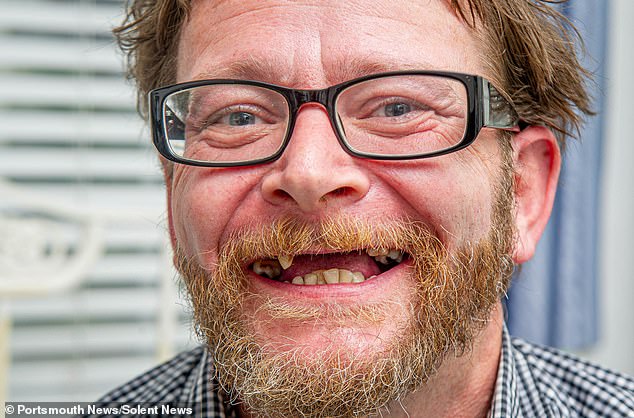 Mr Savage from Southsea in Portsmouth, Hampshire, admitted to getting ‘very drunk’ beforehand by downing eight cans of Stella Artois to mask the pain before he pulled out the first tooth. He then waited a day before pulling out the second tooth 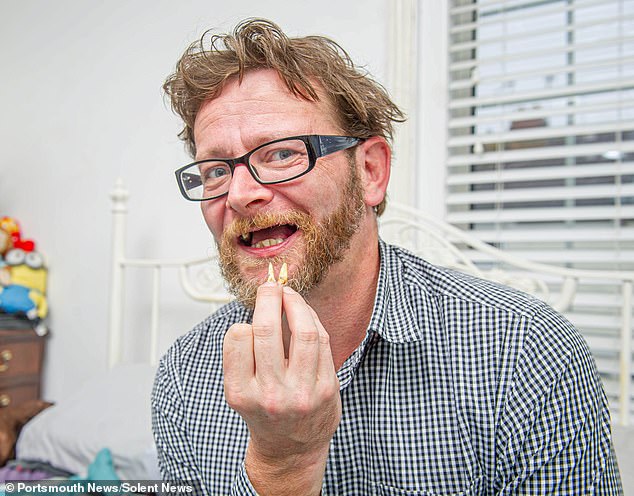 The University of Portsmouth’s Dental School, who Mr Savage approached for help, said it can register and see unregistered patients directed to it by NHS 111 ‘when able’ but warned that its capacity is ‘dramatically reduced’.

The number of NHS dentists in Portsmouth dropped by around a third between 2018/19 and 2019/20. The wider Havant area dropped by half, while Fareham and Gosport saw a 20 per cent reduction.

Provision in the city suffered badly from the collapse when Colosseum Dental shutdown practices in Southsea, Paulsgrove and Portsea affecting around 16,000 people.

NHS South East signed up temporary providers and are set to issue new contracts to practices to plug the gaps, but this has been delayed.

Portsmouth South MP Stephen Morgan said Mr Savage’s case was ‘yet another example of the sad consequences of the Government failing to provide the service levels that are required’.

Roger Batterbury, chairman of Healthwatch Portsmouth, said he was in ‘absolute shock’ at the story. ‘It is a dreadful situation that dental care has got to a situation like this in the city where a gentleman felt the need to rip out his own teeth,’ he said.

‘The situation this gentleman suffered is truly appalling and clearly should not have happened. We have heard of other people’s experiences of accessing dental services throughout the pandemic with initially most being shut until they were Covid secure.’

Mr Batterbury will now it up with the NHS South East dental procurement team. He said 50 per cent of enquiries to the watchdog were about dental needs.

When dental practices reopened after lockdown, services were ‘severely squeezed’.

Experts warned no-one should ever remove their own teeth. Sepsis is a real risk, along with breaking teeth and uncontrollable bleeding.

‘The obvious thing is sepsis, it kills more than 50,000 people — using what this man used is a recipe for disaster. 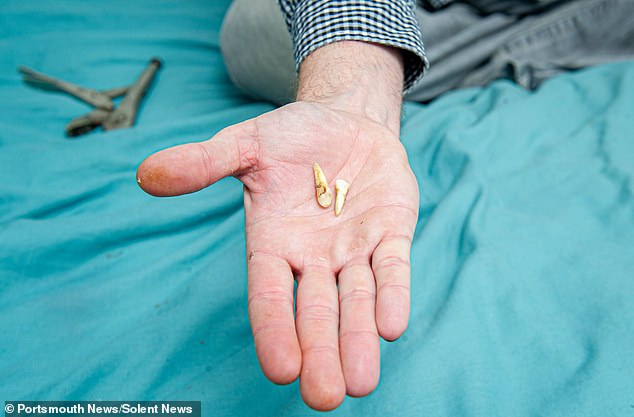 Mr Savage signed up to receive Universal Credit during lockdown, leaving him with £50 a week for food and bills, meaning he was reluctant to spend the £100 per tooth it would have cost him to have them removed privately

‘It’s terrible to hear this tragic story. There are Urgent Dental Centres that are seeing people, it may just be that he had a bad day where there weren’t enough appointments.’

Mr Gowers said dentists are currently seeing around 37 per cent of appointments compared to last year, with reductions in capacity due to Covid-19 measures.

Anyone needing emergency dental care and who is not registered should call 111 to organise an appointment at the urgent dental centre.

He warned another crisis looms. Unseen patients with tooth decay and gum disease will need extensive treatment when more people start to flood back into practices. ‘This has the potential to go Pete Tong’ he said.

Dental care in Portsmouth plunged when a provider blamed recruitment difficulties for not being able to run anymore.

Some provision has been arranged, with the University of Portsmouth and Bupa Dental Care filling in a few gaps. Perfect Smile later also stepped up to temporarily help out at its practices in North End and Cosham.

Appointments were snapped up and a three-month delay in the NHS issuing new contracts has put further pressure on dental patients.

The Covid-19 crisis delayed the signing of new contracts with providers, with NHS England saying this will be done this autumn.

New formal contracts were expected in April this year, and then again in July but did not materialise.

They branded it as ‘not good enough’ that NHS England would provide a new practice in the north and south of the city.

Last year when Colosseum Dental was about to shut, Portsmouth South MP Stephen Morgan called for NHS England to answer questions in Westminster saying NHS England and the collapsed group had not communicated enough.

Business
We use cookies on our website to give you the most relevant experience by remembering your preferences and repeat visits. By clicking “Accept All”, you consent to the use of ALL the cookies. However, you may visit "Cookie Settings" to provide a controlled consent.
Cookie SettingsAccept All
Manage consent